(About therapy #6:) Therapy and the three tests

We’ve been talking for thirty minutes, and it’s going fine for a first session, but I can tell something’s bothering him. So I ask what it is.

“How do I know if you’re the right therapist?” he asks.

“Because you’re the third one I’ve talked to this year,” he says.

“And the others weren’t right?”

“Nope,” he says. “But it took me months to realize it, and I don’t want to go through that again.”

“To answer your question, you can’t really know ahead of time if a therapist is right for you. But you can get to where you trust that they are. And there are tests to help you get there.”

“Yes. You’re probably performing them already, but it can help to put a label on what you’re doing unconsciously.”

“There are three. The first is for safety.

“Drop down out of your head and ask your stomach: How does it feel to be talking to this guy? Does it feel like I’m being judged? Can I imagine telling him the truth about stuff I usually keep to myself? Do I feel safe disagreeing with him? Questions like that. Trust your stomach’s answers. If it tightens up, that might be a red flag.”

“The second test is for relief. When therapy works, you should feel better at the end of the session than at the start — calmer, or clearer, or more hopeful, or at least less alone.  Not all sessions end this way, but most of them should.”

“That didn’t happen with the other two therapists,” he muses. “But I thought it was my fault.”

“Like I said, trust your stomach. It’s often smarter than your head.”

He nods. “That’s what I finally did when I fired them. Okay, what’s the third test?”

“It’s for what I call resonance.

“It’s what helps you feel the therapist gets you.  It’s also what makes it possible to trust them. Essential, I think, to getting any real work done.”

“Did you have that experience with either of the other two therapists you tried?”

This continues a new series of posts excerpted from Monkeytraps in Everyday Life: A Guide for Control Addicts (in press).  It’s about psychological monkeytraps: what they are, how they work, and how recovering control addicts can learn to notice when they’ve trapped themselves by trying to control what cannot or should not be controlled. Read the introduction to the series here.

I am upset by my child’s angry behavior.

Step 2: I misread the discomfort.

“I must make this behavior go away.”

Step 3: I try to control the discomfort.

I punish my child for expressing anger.

Step 5: I misread the failure.

“My punishments are not severe enough.”

My child’s anger and my upset both worsen.

“The truth about rage is that it only dissolves when it is really heard and understood, without reservation.”

Acknowledging the anger, as well as the more threatening feelings under the anger

If you can keep yourself from getting triggered and acknowledge why your child is upset, his anger will begin to calm. That will help him feel safe enough to feel the more vulnerable emotions driving the anger. Once the child can let himself experience his grief over the broken treasure, his hurt that his mother was unfair, his shame when he didn’t know the answer in class, or his fear when his classmate threatened him, those feelings begin to heal. As those vulnerable feelings begin to fade away, he no longer needs his anger to defend against them — so the anger vanishes.

By contrast, if we don’t help kids feel safe enough to feel those underlying emotions, they will just keep losing their tempers, because they don’t have any other way to cope with the upsets inside them. These kids often seem to have “a chip on their shoulder” because they lug around resentments; a feeling that life is against them. They’re always ready to get angry.

Monkeytraps: Why Everybody Tries to Control Everything and How We Can Stop
is available here. 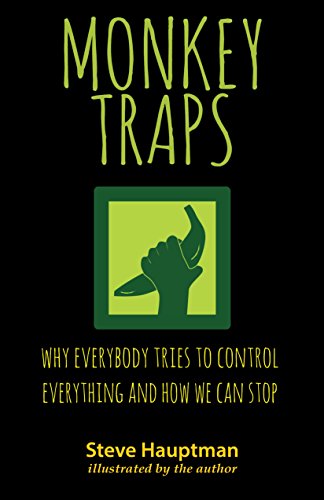 (About therapy #5:) Therapy as sailing lessons

This continues a new series of posts excerpted from Monkeytraps in Everyday Life: A Guide for Control Addicts (in press).  It’s about psychological monkeytraps: what they are, how they work, and how recovering control addicts can learn to notice when they’ve trapped themselves by trying to control what cannot or should not be controlled. Read the introduction to the series here.

I am frustrated and angry that my child habitually lies to me.

Step 2: I misread the discomfort.

“I must discourage this behavior that I dislike.”

Step 3: I try to control the discomfort.

I punish my child for lying.

Now afraid of me and my reactions, my child’s lying increases.

Step 5: I misread the failure.

“I must try harder to discourage this behavior.”

I am frustrated and angry that my child habitually lies to me.

~ Parents should keep in mind that telling lies is a natural part of child development and that in most cases, children outgrow this behavior.

~ Parents should consider a child’s age, the circumstances and reasons for the lie, and how frequently he engages in this behavior.

~ Some common causes of lying in school-age children include:

~ Do not make kids feel like they cannot come to you. If a child is worried that you will be angry, he may try to avoid telling you the truth at all costs. The important thing is to help your child feel secure, safe, and supported so that he knows he can talk to you without losing your affection and love. In fact, research shows that when you threaten kids with punishment for lying, they are less likely to tell the truth.

~ Katherine Lee, What to do when kids lie at the VeryWellFamily blog

Monkeytraps: Why Everybody Tries to Control Everything and How We Can Stop
is available here.

It’s Election Week in the good old Dysfunctional States of America, and since so many of us are suffering as a result I thought it might be a good time to repost this reminder of why it is normal for human beings to feel, well, nuts.

Despair not, friends.  All things pass.  This will too.

(If you’re new to Monkeytraps, Steve is a therapist who specializes in control issues, and Bert is Steve’s control-addicted inner monkey.  That’s the two of us above.

Yes, you heard me right.

Not embarrassed to admit it, either.

Because I know a secret.

How do I know this?

Because you’re human.  (Unless, of course, you’re one of the many dogs or cats who enjoy this blog.)

And, being human, you’re a victim of what has been called monkeymind.

It’s what you hear in your head when your attention isn’t distracted.

It’s the sound of a brain which over millennia has evolved into a sort of top-heavy computer, built for problem-solving, and devoted to finding new problems to solve.

It’s the whispering, worrying, fretting, scolding and mocking that keeps you unhappy and on guard against life.

It’s the sound of a normal human mind at work.

In other words, the most human part of you.

Still not sure what I mean?

Experiment.  Take a moment now (when you finish reading this sentence) to sit without thinking for, oh, a minute or so.  Just sixty seconds.

Steve wants to add something.

What makes it nuts is that it’s so detached from reality.  Like a monkey swings from tree to tree to tree, monkeymind swings from past to future and back again, over and over, ceaselessly remembering, anticipating and fantasizing.  It’s never still, never focused on the here-and-now — a Now which may actually be perfectly safe and okay.  So when you’re in monkeymind you’re having all these feelings — often painful ones, anxiety and anger and such — that have nothing to do with what’s really happening in your life at the moment.  It’s like being trapped in a nightmare, unable to wake up.

Speaking as a recovering inner monkey, I would add that there’s one other thing that makes monkeymind nuts.

It operates on the assumption that if we think and analyze and strategize long and well enough we can solve every problem and bring life under control.  That if we could just figure things out, life could be perfect.  Perfectly safe, perfectly comfortable, perfectly happy.

I remember a Little Rascals episode in which the kids got their mule to walk in a circle by extending a pole out over his nose with an apple dangling from the end.  The donkey kept plodding after the apple endlessly, never getting closer, and apparently never noticing.

Yes.  We all chase that apple.

Well, I for one am sick of it.

That’s why I’m a recovering monkey.  I’m sick and tired of feeling victimized by my own mind.

Tired of fighting reality instead of accepting it.

Tired of trying to control everything.

Tired of this never-ending plod towards an apple I can never reach.

(About therapy #4:) Therapy and old hammers

“So how do you change ingrained behaviors?” she asks me.

I can guess what she’s talking about.  But if she wants to generalize for now, fine.

“Generally,” I say, “you start by thinking of the behavior as an answer to a question.  Decide what the question is, then find a better answer.”

“Question?  What sort of question?”

“I can’t say No.  Whatever people ask me for, I feel compelled to give it to them.”

“And this is on your mind because….”

She sighs. “Last night a mom in my daughter’s class called to ask me to help her put together a holiday party.  I wanted to say No, but I said Yes.”

“And why do you think you said Yes?”

“Okay,” I say, “so the underlying question here sounds like How can I get comfortable with this person?  How can I make this a pleasant interaction? Something like that?

“Ever hear of Abraham Maslow?” I ask.

“American psychologist.  He said that when the only tool you have is a hammer, every problem starts to look like a nail.

“Your hammer — the one you picked up in childhood and still rely on to solve interpersonal problems — is control.  You try to control the people around you, mainly by giving them whatever you think they want.  It’s called people-pleasing, and it’s why you can’t say No.”

“People-pleasing? I thought I was just being nice.”

“Right.  So you answered the question How can I feel like I want to feel? with your old answer: Give this person what she wants.  But it didn’t work, because the hammer that helped you survive as a kid in your alcoholic family doesn’t work so well for you as an adult.”

“An alternative to controlling people.  Be yourself, tell the truth, and let the party lady have her feelings.”

“Actually it’s much easier than people-pleasing.  But at the beginning it’s scary.”

She shakes her head.

“I don’t want to.  That thing is getting too heavy.”