In group. “I have insomnia,” Teacher says.  “Every morning I wake up at three.”

“Sure.  Testing starts soon.  I lie there worrying about how my students will do.”  She frowns.  “The thing is, the damn tests are ridiculous, and I know it  Everyone knows it.  And I know I’m a good teacher.  And yet I can’t stop worrying about how my kids will do on these meaningless tests and what sort of evaluation I’ll get.  And I get so mad at myself for losing sleep over this.  I feel so stupid.”

“Me too,” blurts Store Manager.  “I know I’m a good manager.  My boss tells me I’m the best they have.  But whenever it’s review time I get crazy.  I’ve never had a bad review, not one, and yet each time I worry this will be the first.”

“God that’s familiar,” says Wife.   “I feel like that whenever my inlaws visit.  I keep imagining my mother-in-law is judging how I cook, how I keep house, how I raise my kids, how I wear my hair, for gods sake.  And yes,”  she turns to Teacher, “it keeps me up the night before they visit.”

“Does she criticize you?” Teacher asks.

“You have an adult part and a kid part.  The adult part knows you’re a good teacher or store manager or that your mother-in-law really does loves you.  But the kid part, she’s hungry.”

“For what?” Store Manager frowns.

“Because you didn’t get enough when you were kids,” I say.  “Kids who get enough absorb it.  They store it up.  Then later they can give it to themselves.  Kids who don’t get enough enter adulthood insecure and hungry.  They usually hide their hunger, even from themselves.  But it plays like background music behind everything they do.  Secretly they seek approval everywhere they go.  And when they think they’ll get the opposite, they panic.”

The three are quiet.

“You start feeding yourself,” I say.  “First, admit your need for approval — to yourself.

“Second, take it to people you love and trust.  I suspect they have no idea how hungry you are.  Let them know, like you just did here.

“Third, be brave.  Ask them for what you need.  Ask for reassurance and validation and encouragement.  Do you guys ever do that?”

They shake their heads.

“No.  Hiding your need, that’s codependent.  So is lying awake worrying about it.  So is knocking yourself out to be the perfect teacher or manager or daughter-in-law.  Perfectionism is what kids do to get approval.

“But owning a need, and asking for help?  That’s healthy.  That comes from the grownup part.”

Since this week I have grandparenting on my mind, I thought I’d republish this, my first post on the subject.

So now I’m a grandpa.  Which is odd, considering how inside I continue to feel like an adolescent.  But it does make for some interesting experiences.

I’m babysitting Wyatt, who’s five months old.  He’s in his ExerSaucer, wobbling back, forth and sideways, drooling and gurgling at the brightly colored plastic sea creatures hanging around him.

I’m only half paying attention.  As usual, I’m lost in my own thoughts.

Then I notice he’s silent.

I look over and find him staring at me.

I stare back.  The moment lengthens.  He holds eye contact.  Doesn’t move.  Doesn’t blink.  Doesn’t get bored or embarrassed or nervous, as an adult would.  Just stares.  Smiling at me.

I smile too, but he’s making me nervous.  This moment of raw contact feels uncanny, like something beyond normal human experience.  I feel an urge to end it, to look away, or joke, or take a picture with my cell phone, or create some other distraction.

Instead I stare back.

And the thought comes, It’s like looking at God.

Years ago a client surprised me by abruptly asking “What’s a therapist’s job?”  A simple question, the sort that catches you flatfooted.  I felt really stupid.  I had to think.

Eventually I told her that I saw my job as similar to Michelangelo’s.  Michelangelo reputedly defined the sculptor’s job as freeing the statue from the stone.

The person inside.  The natural, unafraid, undefended part.  The God part.

Sunday school taught me to think of God as resembling Charlton Heston in a bathrobe.  That was a long time ago.  Lately I’ve come to think of God as something more like The Force in Star Wars — a sort of energy which animates and organizes things, makes grass sprout and wounds heal and babies grow, holds things together and makes sense of life’s pain, loss and chaos.

And when it comes to people, I think of God as the part of them that gets buried in the course of getting educated and socialized.  The part therapy tries to unearth.  The spontaneous, curious, fearless, loving part we all carry around inside us.  The God part.

The part that’s staring at me now.

Maybe it’s coincidence.  But Thursday I had my first granddaughter,

and then yesterday I felt the urge to go update my profile on Psychology Today — specifically, the paragraph describing my Tuesday night women’s group, which now reads:

Most women are trained to be codependent — i.e., to take better care of others than of themselves — as a way of winning approval and love. This group is for mothers, daughters, wives and single women tired of losing themselves in relationships and ready to make their own needs and happiness a priority. We focus on giving up compulsive controlling of other people and replacing it with emotional support, healthy self-acceptance, and realistic self-care.

One benefit/curse of becoming a grandparent is that you take the long view of things.  You look at this hatchling, and then you look down the metaphorical road and anticipate what she’ll experience.  Projection being what it is (the product more of fear than of hope), I imagine Callie struggling with the same stuff as the women I know, the mothers, daughters, wives and single women trying to grow past their conditioning and give birth to themselves.

It’s a crock of shit, this training.

But it’s so universal and so unconscious that we all get infected by it and grow up emotionally lopsided.  Then we spend our lives blaming ourselves for being inadequately machinelike or inadequately giving.

The luckiest people I know have someone in their life telling them (ideally, while they’re young) not to believe the lies.  That men and women are meant to be just that, human men and women, not machines or bottomless wells of self-sacrifice.

That it’s our right to not grow up lopsided.

And that, if we have grown up that way, it’s our right to work on undoing our lopsidedness.

If not for our sake, then for the sake of hatchlings yet to come.

3 Comments | posted in control, metaphor for 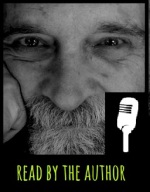 want to hear it again?

where you’ll find all previous

Back to back to face to face 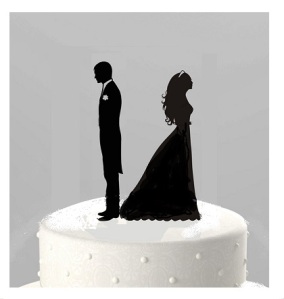 In session, with a couple.  He does not want to be here. But she’ll end the marriage unless he comes. I ask questions, make little jokes, try to engage him.  But it’s slow going until he finally says out loud how he sees things.

“It’s like we live back to back,” he mutters.

This triggers an earworm. You know, when you get a song stuck in your head and can’t stop hearing it? Except my worm isn’t a song. It’s a bit of nonsense rhyme from my childhood.

Back to back
They faced each other,
Drew their swords
And shot each other.

The worm plays over and over while I listen to them talk.

It plays until I figure out what the hell it means.

Then I do, and the meaning comes all at once.  And I interrupt the couple to tell them.

What you said about living back to back?  I really like that.

It’s a great metaphor for marriage.

Because that’s how we all start out:

Living back to back.

Not looking at the person we married.

Where are we looking? Elsewhere.

Maybe at the past, at old relationships or the marriage of our parents. Maybe at the future, what we expect or want or need things to be. Maybe at our own pathology, our anxiety or anger or grief or unhappiness. The stuff we hope the marriage would heal, the way medicine heals illness.

But not at our partner. Not the real person we married, as he or she is right here, right now.

We think we are. But the person we marry is not the the person we dated.  And marriage is not the dating relationship, saturated with fun and sex and all sorts of idealizations and projections.

All that’s temporary.  And eventually we realize that.

And we realize our partner isn’t who we thought he or she is.

And maybe we realize that we aren’t who we thought we were, either.

That’s where the real marriage begins.

But that, in the end, is the work of marriage.

It’s the work of moving — slowly, patiently, with understanding and acceptance — from living back to back to living face to face.

11 Comments | posted in control, metaphor for

want to hear it again?

where you’ll find all previous 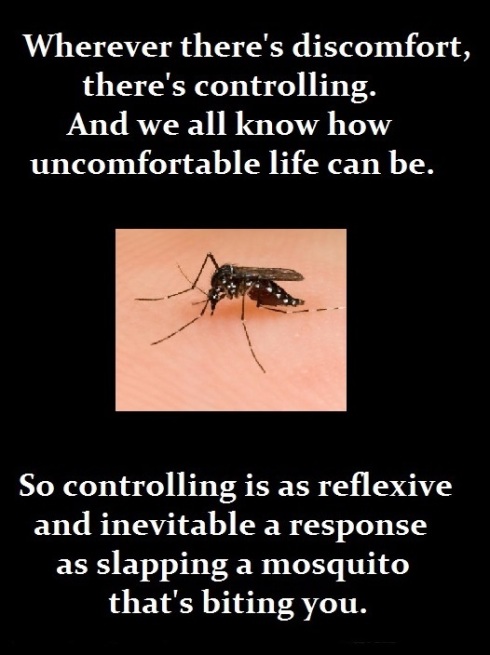 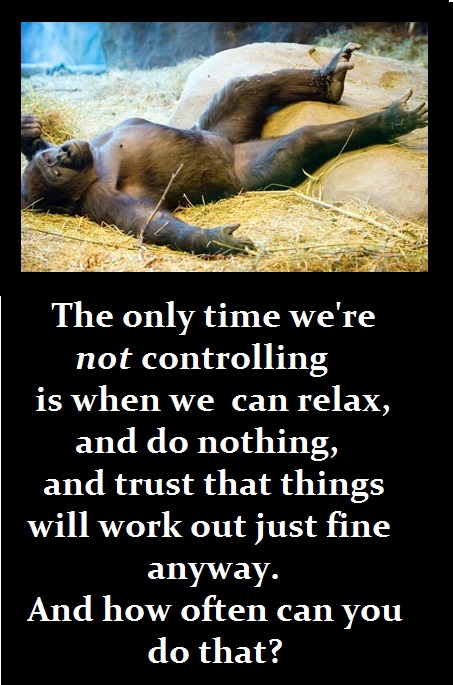 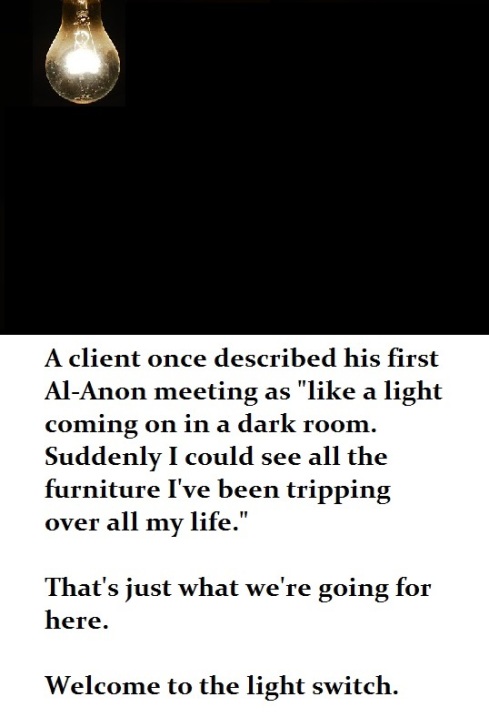