Controlling is hard to spot, and even harder to talk about.

Several reasons for this:

(1) It’s automatic and unconscious, like blinking or the beat of a heart.  You can make yourself aware of your own controlling, but it takes effort.

(3) We use stunted language to describe it.  We apply the verb control to wildly different behaviors, to our handling of everything from feelings to finances, foreign trade to cholesterol, termites to acne.   We almost need to construct a new language in order to adequately describe this chameleon we’re looking for.

Let’s try to do that, then.

We’re forming two online study/support groups for readers who want to explore these ideas with me in real time; one is for therapists who want to integrate these ideas into their clinical work.  Both groups will be small, six members at most, and meet weekly. Fee is $50 per session, and group members may purchase Monkeytraps (The Book) at half price. Interested?  Write me: fritzfreud@aol.com. 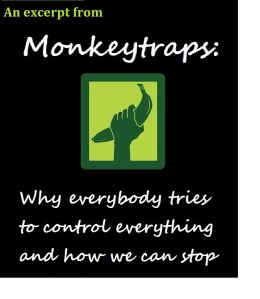 The urge to control is part of our hard wiring.

Because it is wired into us to

..~ imagine a perfect life (one that meets all our needs and makes us perfectly happy), and then

The word controlling covers all forms of this imagining and trying.

Our trying may be large (building a skyscraper) or small (killing crabgrass), complex (winning a war) or simple (salting my soup).

It may be important (curing cancer) or petty (trimming toenails), public (getting elected) or private (losing weight), essential (avoiding a car crash) or incidental (matching socks).

I may inflict my trying on other people (get you to stop drinking, kiss me, wash the dishes, give me a raise) or on myself (raise my self-esteem, lose weight, hide my anger, learn French).

All this involves seeking some form of control.

We’re controlling nearly all of the time.

We control automatically and unconsciously, waking and sleeping, out in the world and in the privacy of our thoughts.

From birth until death.

The only time we’re not controlling is when we can relax, and do nothing, and trust that things will work out just fine anyway.

How often can you do that?

We’re forming two online study/support groups for readers who want to explore these ideas with me in real time.  One group is for therapists who want to integrate these ideas into their clinical work.  Both groups will be small, eight members at most, and meet weekly. Fee is $50 per session, and group members may purchase Monkeytraps (The Book) at half price. Interested?  Write me: fritzfreud@aol.com.

The ability to dictate reality.

That’s how I define control.

It’s not a definition you’ll find in any dictionary, and probably not how you define it.

But it’s essential to understanding everything that follows.

Dictate means rearrange or edit according to our preferences.  Reality means, well, everything — everything outside us (people, places and things) and inside us (thoughts, feelings, behavior) too.

Defined this broadly, the wish for control stands behind just about everything we do consciously.

Plus most of what we do unconsciously (feel, fantasize, worry, dream) as well.

We seek control in order to get reality to behave as we want it to.

We seek control because we want to make the world adjust itself to us, instead of vice versa.

We all want control in this sense.

Not just want, either.

Control is the mother of all motivations.

Every human ever born has craved it and chased it.

Because it’s a craving that is literally built into us.

We’re planning an online study/support group for readers who want to explore these ideas with me in real time.  Also coming, a group for therapists who want to integrate these ideas into their clinical work.  Both groups will be small, eight members at most, and meet weekly. Fee is $50 per session, and group members may purchase Monkeytraps (The Book) at half price. Interested?  Write me: fritzfreud@aol.com.

The Third Paradox of control: 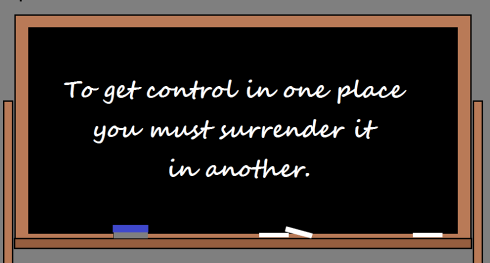 Controlling boils down to a tradeoff.

Think of the original monkey trap:

To hold on to the banana, the monkey surrenders his freedom.  To regain his freedom, he must let the banana go.

To control you (make you like, love or accept me) I must surrender control of something else — like my ability to be honest, or spontaneous, or emotionally expressive.

Taking control of my emotional life — especially how I feel about myself — means surrendering control over how you react to me.

It also applies to New Year’s resolutions, not to mention all goal-setting:

To reach a particular goal (like writing my book) I must surrender control of others (like spending time with my family, or on chores that absorb my energy and attention).

To gain control of my weight I must surrender control (i.e., limit my choices) of what I put in my mouth.

To control my social anxiety I must detach from how other people see me and practice being myself.

So control and surrender are two sides of the same coin.

To win A, you must sacrifice B.

Fill your bowel to the brim

and it will spill.

and it will blunt.

Chase after money and security

and your heart will never unclench.

and you will be their prisoner. 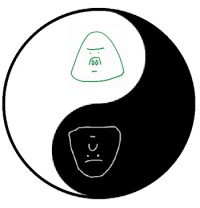 (If you’re new to Monkeytraps, Steve is a therapist who specializes in control issues, and Bert is Steve’s control-addicted inner monkey. That’s Bert at the left, looking powerful.

What follows is an expansion of the article “Seven Kinds of Power,” which appeared previously in several places.

Maybe because Steve’s been working hard and feeling a bit crispy — almost burnt out, but not quite — he’s been thinking a lot lately about the difference between control and power.

So he asked me (his control-addicted-but-working-his-butt-off-in-recovery inner monkey), to share what I’ve learned about that difference.

No, they’re not the same thing.

In some ways, they’re opposites.

One difference is: power is possible, but control is usually an illusion.

Another is: power can set you free, while controlling can make you crazy.

Control means the ability to dictate reality. To get life itself — people, places and things — to meet our expectations.

But power (as we here at Monkeytraps define it)  means being able to get your needs met.

To take care of yourself.

To not just survive, but to heal, and grow, and be happy.

I think it’s power we all want and need.  But because we never really think about how power and control differ, we end up confusing the two. And then we chase the wrong one.   Which can be disastrous.

Steve, give an example of the difference.

Well, notice how we hear the words differently.

Imagine you have a daughter of marrying age.  She comes home and reports she’s engaged to a man you don’t know.  “What’s he like?” you ask.

How do you feel?

How do you feel now?

If you’re anything like me, Scenario A leaves you intrigued (powerful has several connotations), while  Scenario B leaves you pretty damned nervous.  Who wants a controlling son-in-law?

Imagine your rich uncle dies suddenly and leaves you control of his multinational corporation.  You wake up one morning the CEO of Big Bux, Inc.

You go to your new job. You sit behind a huge desk. Four secretaries line up to do your bidding. You have tons of control. You can hire and fire, buy and sell, build plants or close them, approve product lines, mount advertising campaigns, manage investments, bribe congressmen, you name it.

How do you feel?

If you’re like me, you feel crippled by anxiety. Bewildered and overwhelmed by your new responsibilities. Disoriented. Panicked.

Anything but in control.

~ Control focuses outward, at other people, places and things. So control-seeking pulls me away from myself, away from self-awareness and self-care.   The more controlling I am, the more I lose touch with me.  But power focuses inward, on my own needs, thoughts and feelings.  So developing power is all about developing the ability to know, understand and accept myself.

~ Control works paradoxically. (See Bert meets the First Paradox  and Control is a boomerang.)  People who depend on having control to feel safe and happy don’t feel safe or happy most of the time.  Chasing control is like chasing a train you can never catch. Power, though — rooted in healthy, intelligent self-care — is something you really can learn and practice.

Like a muscle which, if you exercise it, can’t help but grow stronger over time.

Watch the short, wordless film “Bodhisattva in Metro.”  Oh, go ahead.   You can spare the time.  It’s just over six and a half minutes, it should make you smile, and it offers one example of what we here at Monkeytraps think of as a powerful person.