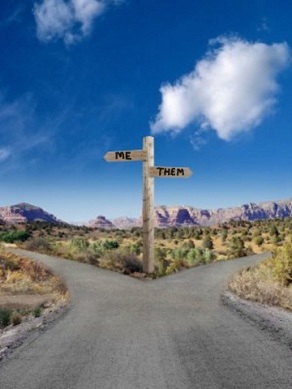 Her husband bowls every Wednesday, golfs weekends, watches tv each night until bed.  Never talks to her, never compliments her, hasn’t taken her out to dinner in years.  Expects sex regardless.

“Regardless of what?” I ask.

She has two teenagers, whom she serves as cook, laundress, chambermaid, tutor, therapist, referee and chauffeur.  On Mother’s Day they gave her a World’s Greatest Mom card from Wal-Mart, then spent the day with friends.

Her parents are in from Florida.  They visit frequently without asking, stay a week at a time, and criticize everything from her haircut to her parenting.  (I jot critical parents on a mental note card, file it away for a later session.)

Her best friend is recently divorced, and calls her nightly either to exult or to mourn her new freedom, depending on how her last date went.  (“And do you ever call her?”  “What for?” she asks, without irony.)

“Have any friends or family who aren’t totally self-involved?”

“By teaching you to drive,” I say.

“Imagine someone who learned to drive a car without ever being  taught how to make a left turn.  So whenever they go out all they can do is turn right.  What would happen to them?”

“When was the last time you made a left turn?”

Her eyes widen.  She thinks.

“I don’t make those,” she says finally.

“And therapy can teach me to turn left?”

I nod.  I’m expecting the next question.

“But isn’t that selfish?”

“Yes,” I said.  “What’s your objection to selfishness?”

I’ve asked that question hundreds of times.  No one has a good answer.

“That’s what everyone says,” I say.  “I suppose some believe it.  But most people use it to convince others to put them first.  The most selfish people I know tend to be the first to condemn selfishness in others.

“Me, I think of it as a survival skill.   Selfishness is essential, at least some of the time.  If you don’t take care of yourself, who will?”

“Probably not.  You’ll have to train them.”

“We’ll talk details later.  But it amounts to putting yourself first and letting them adapt to it.”

“Sure,” I said.  “Look how well it’s worked for your husband, your kids and your parents.”

Self-love, my liege, is not so vile a sin as self-neglecting. 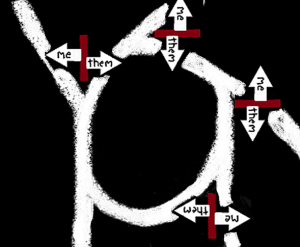 Some of us give because we can’t not give.  It’s our way of getting by in the world.

At least if I give, the thinking goes, others will like me.  Better yet, they may even come to need me.  Then I won’t be so alone in the world.

Giving becomes a kind of barter to belong — a bid for love, rather than an expression of it.

~ From “Healthy selfishness” at daily.om.

I think if you do not allow yourself to know them and to exercise adequate levels of self-care by satisfying those wants and needs in ways that make you feel good you will find unhealthy and unsatisfying behaviors that you do in order to be safe.

The relationship will become toxic and cycle through predictable patterns of acting out, failure and disappointment.

Selfish behaviors that take advantage of or hurt someone else are not what I am describing.  Behaviors that are done in service of the health of the self are self-ish.

~ From “The concept of healthy selfishness in therapy” by Brett Newcomb.

Felicia’s pissed at me.

I’m not really sure.

Wednesday she called me an “uninvolved father.”

Thursday she called me a slob.

How did you respond?

Well, let’s see. Tuesday I went in and asked my boss for a raise.

Thursday I helped Junior with his science project.

And Friday I did two loads of laundry and cleaned the bathroom.

No, gorilla.  It’s a control thing.  Your two inner monkeys are battling it out.

Happens all the time in split-level relationships.*

One partner seeks satisfaction by complaining or making endless demands on the other.

The other seeks relief by trying to appease the first.  But it never works.

Because they’re ignoring the real problem, whatever that is.  Pretty common in couples who haven’t learned to talk to each other.

Well, I hate feeling beat up.  What can I do?

Give up control.  Stop appeasing her.

Give up control in another way.  Ask what she’s really angry about.

She may not know at first. That’s fine. Be patient.  Be curious.  Be brave.  Keep asking.

Boss yelled at me.

And how do you feel?

So why do you feel guilty?

Sure.  Anger’s like poison.  If you don’t spit it out at the person who hurt you, it eats away at you and feels like guilt.

I don’t know about that.  I’ve always been a pretty guilty person.

How big an asshole?

And how’s it feel, working for an enormous asshole?

How you feeling now?

Better.  Much better.  Not guilty at all.

Does that always work?

When the guilt comes from internalized anger, pretty much.

By the way, how’s your marriage going?

So.  Your wife sent you.

She says I have control issues.

I have no idea.

She doesn’t say what bothers her?

Maybe we should ask Felicia in to tell us herself.

How would you feel about that?

I’ll tell you everything.