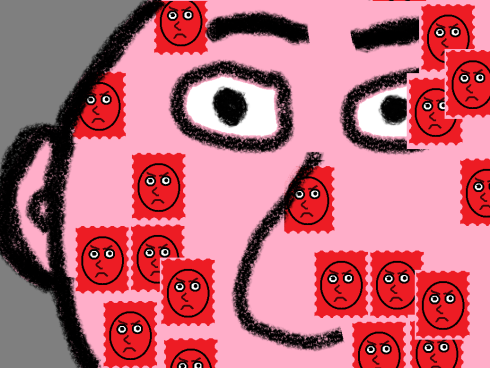 Jack’s sessions have become predictable.  He comes in mad at his wife and starts listing her most recent sins.

She’s so disorganized I can’t find anything.  This morning I had to go hunting for clean socks.  She texts her friends when she should be supervising the kids.  She buys stuff we don’t need, leaves dirty dishes in the sink, and there’s always mail piled up for me to go through.  She’s home all day and can’t go through the damned mail?

This happen every Monday.  Tuesdays I see his wife Jill, with identical results.

He doesn’t talk, he barks.  Every word out of his mouth sounds angry.  I try hard to make him happy, but there’s always something I haven’t done or that I’ve done wrong.  And he overreacts all the time.  This morning he couldn’t find his socks and he lost it.  The kids are scared of him.  I go from scared to angry to discouraged and back to scared again.

It’s a metaphor drawn from decades ago, when supermarkets gave out trading stamps.  You bought a bag of groceries and they gave you a sheet of little stamps that you took home and pasted into a stamp book.  Fill enough books and then trade them in for a toaster or something.

The emotional version of this is a kind of evidence-gathering.  People attached to a particular feeling or belief do it as a way of validating their prejudice.   Jack and Jill, for example, both carry chronic anger at the other, plus the belief my partner causes my anger.  And they spend their days collecting evidence that both the feeling and the explanation are justified.

~ It’s the result of selective attention, and so results in a distorted picture.  Jack’s stamp collecting, for example, ignores the things Jill does right and how hard she tries to please him, while Jill’s stamp collecting ignores how stressed Jack is by work and how much he loves his children.  But the unconscious payoff for stamp collecting is self-validation, not accuracy or fairness.

~ It’s usually symptomatic of a dandelion fight.  Dandelion fights are fights about the wrong thing, fights which ignore underlying issues.  Couples scared of addressing questions like “Do we still love each other?  Was this marriage a mistake?  Have we grown too far apart to repair it?” often fight about finances or parenting or laundry.  Stamp collecting perpetuates these battles.

~ The feelings behind it are often outdated.  Every partner brings unfinished business into the marriage — unexpressed feelings, unresolved conflicts, unmet needs.  (Jack, for example, had an alcoholic mother who left him needy for attention and nurturing, while Jill’s emotionally absent parents left her scared of abandonment and doubtful anyone can love her.)  This unfinished business then gets triggered and reenacted again and again.  Dandelion fights and stamp collecting keep this business unfinished.

By the way, chronic anger is not the only payoff for stamp collecting, which may be used to validate any feeling, conclusion or prejudice.  Many people unconsciously collect stamps to perpetuate feelings of sadness, hopelessness, inadequacy, rejection, distrust or victimization.

But in the end stamp collecting is like collecting pretty stones on the beach.

Each individual stone looks attractive, worth grabbing and stuffing in your pocket.

But do it long enough and you end up overloaded, exhausted, and forever limping.

This entry was posted on Friday, June 10th, 2016 at 11:58 am and posted in control, metaphor for, MT FOR COUPLES. You can follow any responses to this entry through the RSS 2.0 feed.
« Expectation vs. hope
Blame and sickness »