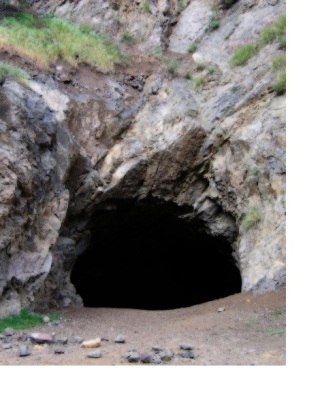 Years ago I had a friend named Richie whose favorite expression was head up your ass.

But I never quite understood what it meant.

(Probably I got hung up on the visual.)

Anyway, Richie came to mind this morning.  My wife and I were sitting on the deck with our coffee, and I was thanking her for keeping me afloat, emotionally speaking.

She was pleased.  “That’s good to hear,” she said.  “Often I feel like I’m failing, because so much of the time you seem distant or worried or unhappy.”

I’m like most other men in this way.  Most women I know handle stress by sharing it, bringing it to their relationships; most guys carry it off into isolation.  Where a woman gets on the phone, a man retreats into his cave.

I’m a cave-dweller from way back.

In grade school I decided that people were untrustworthy and best kept at a distance.  The cave into which I retreated then was my own skull — dark,  cramped, but way less scary than the big uncontrollable world.

I furnished my cave with books and movies and tv shows and long convoluted conversations with my own puzzled fascinating self.

I lived there through adolescence and into early adulthood.

Eventually, when I had to leave the cave to make a living, I looked around for some way to do so which would allow me to stay mostly in hiding.

So I became a therapist.

Looking back on that choice now, I see two things that made therapy appealing.  The first was knowledge.  I loved the idea of becoming a magus, a magician of the mind, possessor of arcane understanding and skills that would enable me to transmute (and so rise above) the common run of human misery.

The second was invulnerability.  Doing therapy seemed a terrific way to get really close to people without having to risk criticism or rejection or abandonment.  To make contact without making contact, so to speak.

I’ve spent decades doing this work.  I still enjoy it.  I’m reasonably good at it, I think.  I know there are lives that I changed, even a couple I saved.

But I’m also coming to see what being a therapist has cost.  There are parts of me which, constrained by my professional role, never developed as I’d have liked them to.  Spontaneity.  Creativity.  Emotional honesty.  The courage to be vulnerable, take risks, make real contact.

But that’s how it is with defenses.  You strap them on, thinking they’re armor, and then one morning wake up feeling like canned tuna.

Defenses are indispensible, of course.  Without them we’d go nuts, or at the very least become paralyzed by our own fears and anxieties.

But defenses can also be monkeytraps: attempts to hold on when we really should let go.  And six decades of living (not to mention two of doing therapy) have taught me to see cave-dwelling as just another futile grab at the illusion of control, another attempt to escape the wet windy weather of emotional life.

So it sort of worked, and it sort of didn’t.  In any case, I find myself tired of living dry and in the dark.

So now occasionally I creep out of the cave.  One step at a time.  With clients, for example, I let more of myself show than I used to.  And with family.  And with the book I just published.  And with this blog.

It’s scary.  I like it anyway.  I’m learning to actually enjoy the weather.

It’s wet and sloppy and sometimes chilly out here, but it’s dark, dead and lonely in there.

This entry was posted on Wednesday, March 23rd, 2016 at 11:21 pm and posted in control. You can follow any responses to this entry through the RSS 2.0 feed.
« Celebrating
Dog »