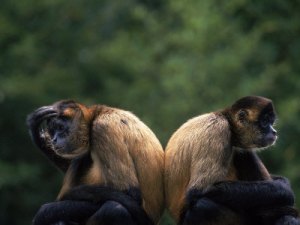 (If you’re new to Monkeytraps, Steve is a therapist who specializes in control issues, and Bert is his control-addicted inner monkey.

Twice I gave it to wives of men avoiding therapy.  Once I was talking to a man who’s a husband himself.

The speech I created spontaneously about six months ago, to address a relationship problem that kept cropping up in sessions.

I see this more and more lately:

No, they’re not gay, or impotent, or anything like that.

They’re not even men who don’t want to love women.

Usually they’re men who believe that they can and do love the women they’re with.

The women they’re with, sadly, tend to see it differently.

Because those women know there’s a fundamental truth about healthy relationships that these men simply don’t grasp:

These guys don’t get that.  They don’t see relationship as collaboration, where what’s good for you is good for me.  Instead they seem to see it as some sort of competition.

They tend to act, often without realizing it,  as if relationship were a zero-sum game, where there’s only so much good stuff to go around, and where a gain for one means a loss for the other.

It’s as if on some deep level they believe, “When you win, I lose.”

I hope (your husband, boyfriend, lover) isn’t one of these.

Because — due respect to the members of my gender – these guys can be damned hard to retrain.

The idea of giving-as-getting is something most women know in their bones. That’s probably because they’re socialized to value relationships in a way men aren’t.

We train men to compete, not to partner.

Worse, we also train them to work, not to feel.  Which leads to another missing piece in their relationships, something else that many men don’t get.

Most of my male clients struggle with relationships with women.  And at some point I usually ask them, “Do you love her?”

And they stare at me as if I’ve just lapsed into a foreign language.

Some just don’t get the question.  “What do you mean,” one asked blankly, “by show it?”

Many shrug.   The shrug usually translates as, Hey, I know how I feel.  I assume she knows too.  Don’t women just know this stuff?

Others argue that they already communicate their love adequately.  I go to work, pay bills, mow the lawn, drive Jimmy to soccer practice, put up with her mother, and even wash dishes occasionally.  Isn’t that enough?  Shouldn’t it be?

If I suggest otherwise, some get angry at me.

My work with these men usually heads in one of two directions.

Some men — usually those who’ve come close to losing the woman in their lives and come into therapy genuinely frightened — are able to face their limitations.  We then have a series of conversations about the nuts and bolts of loving behavior (ways of communicating acceptance, attention and affection), which they work to internalize and practice.  These are the lucky ones.

Others stand pat.  Hey, this is me.  She can take it or leave it.  Interestingly, it’s not that they’re less frightened than the first group.  They’re just more scared of changing than anything else.  Some stand pat all the way to divorce court.

Some stand pat through multiple marriages and divorces.

My heart goes out to these men.   They’re not bad guys, most of them.  They’re not trying to hurt anyone.  They’re just undereducated and overdefended.  (Also victims of a socialization process that tends to leave men emotionally wounded in four specific ways, ways I plan to write about here shortly.)

But the hurt happens anyway, and it can be devastating to all concerned.

So, some questions to chew on:

~ Ever known a man who can’t love women?

~ Ever been in a relationship with one?

~ Are you such a man yourself?

This entry was posted on Sunday, September 11th, 2011 at 12:55 am and posted in control. You can follow any responses to this entry through the RSS 2.0 feed.
« Session 9: Adult child
Session 10: Transference »